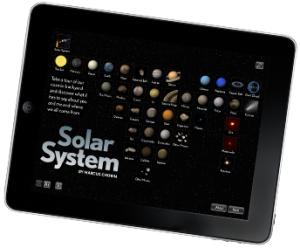 I’m a big fan of Marcus Chown’s down-to-earth explanations of some of the wildest and most amazing physics theories. He has a knack for writing interesting and engaging books about science.  And now, Marcus has released a Solar System app for the iPad.

You can see the preview on iTunes, or read about the making of the app on Futurebooks:

The Touchpress offices were piled high with cardboard boxes and books and smoke detectors (yes, smoke detectors) and little, perfectly engineered cylinders of cobalt and copper and a myriad other substances. “Here, feel how heavy this is,” said Max Whitby, Touchpress’s enthusiastic and (I’m sure he won’t mind me saying this) slightly geeky co-founder. He tossed me a cylinder of tungsten, which was so dense it nearly pulled my arm out of its socket. “When we got a sample uranium, we were even raided by the nuclear police,” he said, gleefully. 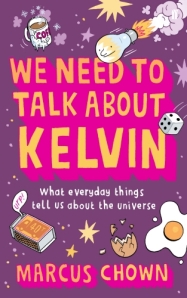 A while ago I offered readers the chance to ask tricky questions of cosmologist and author Marcus Chown.  The questions were exactly what I would expect of my astute and intelligent readership.  Read on to find out what Marcus has to say in response.

Graham said:
OK. Marcus, we hear from scientists so often that “you’d have to know maths to be really able to understand the theory”. Frankly, this always seems a bit feeble. Maths is just a way of expressing reasoning. I suspect what it actually means is that many scientists are not actually able to explain the concepts they deal with but are content to leave this mystery at the heart of what they do and ‘merely’ manipulate the ideas mathematically, almost mechanically. Do you feel there is any truth in this?